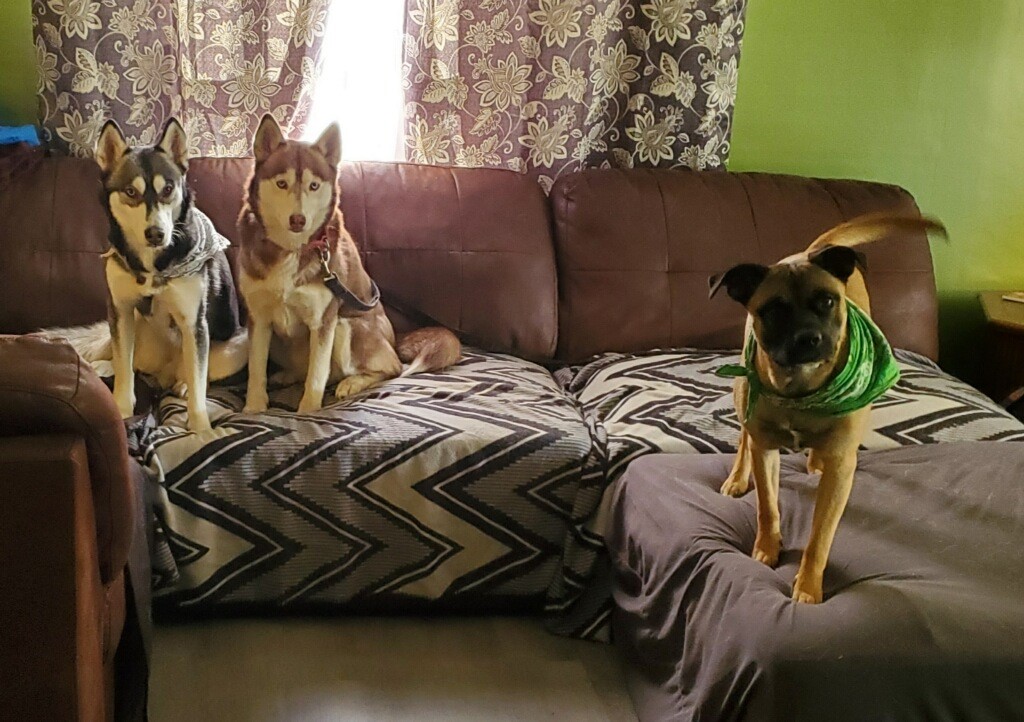 What a lucky boy Tico is!  While his family was constructing a fenced area and before they brought Tico home, they adopted Maple (on the right) from NCCR.   When the fence was done, Tico arrived at his new home!  Just a few months later, Lucy, who had been found roaming the reservation and also from NCCR, joined the family!

Handsome Tico (short for Ticonderoga) arrived at NCCR on 1/20/22, rescued from life as a breeding dog in a puppy mill. He is an approximately 2 year old male Husky. Tico had not had any positive experiences of people before coming to the shelter, so he is understandably very timid and skittish. However, now that he is in a foster home, surrounded by other dogs, a cat and a wonderful caregiver, he is more relaxed and the true husky personality is beginning to make daily appearances!

From his foster mom:   He has become comfortable with just hanging around. My home is not always quite but he rolls with it. He hid behind the couch for the first couple of days, but then got nosy. Then he joined Lolli (see her story here: https://www.caninerescue.org/lollipup-rescued-from-a-puppy-mill/) on her safe spot loveseat. He was taking my socks, slippers, remote, coffee cup, but now he just inspects my items. He has calmed down considerably when you touch him. He comes to bed with us and stays watch if any of us stirs. He is very observant & smart. He carries on with his Husky speak and it’s too fun!! Here he is telling a very long story:  https://youtu.be/q4f9903eGYI!

He is not housebroken, but it’s a work in progress. He wears belly bands and lets me take them off and on. He does not like a standing figure as I found with most puppy mill dogs. We are still working on him coming to me, he cowers and tries to evade, yet if I put a lead on him he follows, but if I try to approach him it’s a tug of war. Tico is very loving, just needs to gain confidence. He would do best in a home with a confident dog he could model after.

Tico needs a normal household, if kids, chill ones, a confident resident dog, and a cat like Gerald…not a scat cat, also a fenced yard because of his urgency to get here to there and back. We are learning “easy” so they enter & exit our home with less chaos.

If Tico sounds like the guy for you, put in your application.  Applying isn’t a commitment to adopt, it just helps us match the dogs and families together giving the adoption the best chance for a success! Here is the link to Tico’s webpage to apply:https://www.caninerescue.org/project/tico/

1All In The FamilySweet Pea and My Three Sons

All In The Family